More Americans have embraced the new sharing economy when it comes to travel, and have grown more conscientious regarding what ecological or ethical impacts their traveling choices have on the destinations they visit, though growing concerns over safety may deter travel to some international destinations, according to the latest “Portrait of American Travelers” survey conducted by travel, hospitality and entertainment marketing agency MMGY Global.

MMGY’s annual study, which analyzed the habits, priorities and preferences of American travelers, found that the average American plans to spend about the same amount on vacations this year as they di d in 2018 ($5,025, compared to $5,038 last year) even though they reported slightly fewer average trips (3.2 in 2019, compared to 3.5 in 2018). 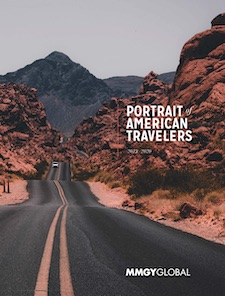 The study discovered that Americans have now adopted a more conscientious approach to travel, either due to environmental concerns surrounding issues such as climate change or how their traveling habits may impact the destinations they visit.

More than half of American travelers (60 percent) believe “overtourism” —or the overcrowding that occurs when too many tourists visit a particular place—will have a significant impact on what destinations they choose to visit within the next five to 10 years, and 48 percent think climate change will have a significant influence on what destinations they visit during the same period.

Corporate social responsibility initiatives appear to have made an enormous affect in influencing consumers’ travel-related purchasing decisions. A majority of American travelers (62 percent) cited corporate responsibility as a reason for their loyalty to an airline, and 60 percent said the same for the hotels they use when booking vacations.

More Americans said they chose a travel service provider during the last year based on perceptions of sustainability and environmental considerations (13 percent in 2019, compared to eight percent last year).

The study also discovered that, either due to cost or the allure of staying somewhere unique, more Americans are now embracing the sharing economy that’s disrupted the travel sector in recent years. According to the study, the percentage of U.S. travelers who relied on shared accommodations during a vacation jumped 45 percent in the last year alone.

Nearly three-quarters of respondents (76 percent) said the enjoy vacationing in a home away from home in 2019, up from 68 percent in 2018, and nearly the same number (74 percent) said arranging shared economy accommodations this year was a good experience, compared to 67 percent in 2018. More than two-thirds this year said they want to stay in unusual places (69 percent), compared to only 56 percent last year.

MMGY predicts that 34 percent of all American travelers will rely on sharing accommodations next year.

Finally, the MMGY study discovered that safety concerns are elevated among travelers this year, perhaps in light of high-profile news items focusing on an alleged uptick in crime and kidnapping in Mexico as well as the more recent stories involving American travelers who’ve died while visiting the Dominican Republic, stories which have tainted both destinations’ reputations. Safety is now second only to cost as the most significant barriers to Americans' travel, according to the study, beating out language barriers, travel time and access to quality healthcare. The importance of a destination's safety is particularly high among Millennials: the study found that safety was up in importance this year for traveling members of this generation, from 79 percent in 2018 to 85 percent in 2019.