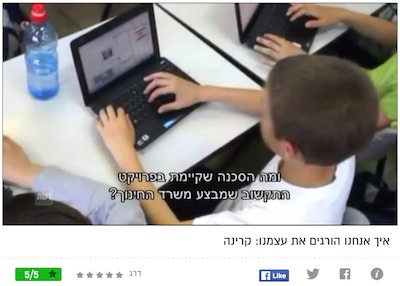 Wi-Fi health advocates were exultant today at news that an Israeli TV documentary titled “How We are Killing Ourselves—Wireless Radiation” won a high rating and Haifi ordered Wi-Fi removed from all schools.

The 30-minute documentary about the “epidemic of Electro-Sensitivity” (ES) aired at 9 p.m. April 12 and “received the highest rating of the day,” according to Dafna Tachover, an attorney with offices in Israel and New York.

She provided a link to the show to Wi-Fi health advocates in other countries noting that while the video is in Hebrew there are some interviews in English.

Tachover said the director planned to do 10 minutes on ES as part of a film about the diseases of the 21st century but after working with health advocates “understood the extent of the problem and the lie and how important it is to give an uncompromising warning to the public.” It was then decided to do 30 minutes mainly on ES and Wi-Fi in schools.

Said Tachover: “The host was a leading TV media person and his tone was uncompromising - no maybes, precautionary etc., the tone was - there is an epidemic out there. Wireless harms and it is time for us to wake up as it is late already. He started by saying that at least 800,000 people in Israel, i.e. 10% of the population already suffer from different levels of ES and twice aired parts of my interview in which I was saying that the rates are already higher and will continue to increase.”

Two government "experts" admitted on the show that the thermal safety standard is irrelevant which is not what they told the Supreme Court, wrote Tachover.

“Most importantly,” she wrote, “the movie created a lot of buzz and sent a very alarming message that radiation harms are not potential but existing, and in an epidemic scale.”

Israelis participating in the show included Amir Borenstein, Yael Levin and her daughter Noa who told what it is like to be electro-sensitive. Parents who fight Wi-Fi in the school were also interviewed. Tachover was interviewed as an expert and activist and on the medical side were Prof. Richter and Dr. Yael Stein. The technical side was presented by engineer Liran Raz of the U.S. Mentioned was Jenny Fry, the 15-year-old U.K. student who committed suicide because of Wi-Fi in her school.

Tachover said Haifa Mayor Yona Yahav announced the city, third largest in Israel, is immediately removing Wi-Fi from its schools, saying "When there is a doubt, when it comes to our children, there is no doubt.”

Said Tachover: “Electro-Sensitivity is an epidemic and not three percent of the population. We are now in the double digits in terms of ES. The public must be told. Wi-Fi in schools is a disaster and as a person who spends two to four hours every day on the phone with people and children who got sick, with many contemplate committing suicide, I urge you all to be uncompromising. The truth, and all of it must be told. Continued good luck to us all and thanks to anyone out there who stands up to evil and stupidity.”