Wi-Fi Health Advocates led by Parents for Safe Technology are mobilizing opposition throughout the U.S. to “5G” (fifth generation) wireless technology being proposed by the Federal Communications Commission.

FCC chair Tom Wheeler has made 5G a “national priority and is pushing for adoption of it July 14. Opponents say he is doing this with no time allotted for public discussion. 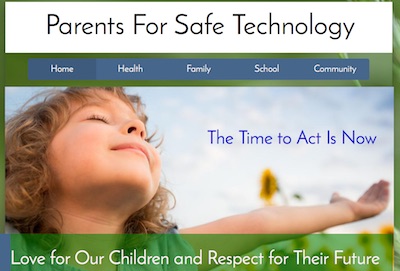 Urges PST: “Be sure to express the importance of having oversight hearings related to the negligence of the FCC in promoting wireless technology and even rolling out an additional radiation intensive technology (5G) after the National Toxicology Program released findings that radiation from wireless technology causes cancer and breaks DNA.”

“The FCC limits on radiation from wireless technology are outdated and inadequate,” says PST.

It quotes the U.S. Dept. of Interior as saying: “The electromagnetic radiation standards used by the FCC continue to be based on thermal heating, a criterion now nearly 30 years out of date and inapplicable today.”

Kate Kheel, director, Maryland Smart Meter Awareness, is helping citizens in their efforts to win attention from their representatives in Congress. She is instructing them on how best to reach elected reps as follows.

Spread the word! Post links to this page (https://www.electricalpollution.com/Stop5G.html) and articles like the one in O'Dwyers: https://www.odwyerpr.com/story/public/7175/2016-06-30/5g-rollout-worries-wi-fi-health-advocates.html

The FCC is voting on whether to move forward with 5G, an extremely dangerous technology. Read Chairman Wheelers comments about the Spectrum Frontiers Proceeding.

This would put 5G transmitters on power and light poles throughout communities across the United States with the aim of creating enough saturation of very high frequency microwave radiation that fiber optic level connectivity is available wirelessly everywhere.

We will need as many people as possible from the U.S. and around the world, including experts, to contact the FCC by July 13, 2016.They vote on the proposal on July 14, 2016.

Please take a moment to contact the FCC Commissioners BEFORE their vote on July 14 in opposition to the rollout of 5G. A template letter is below, please take a moment personalize it briefly with your experience to give it greater impact.

Please send a copy of your letter to your U.S. Representative and Senators and the relevant committees.

Ultimately, it is Congress that decided to give sole responsibility for wireless promotion and safety to an industry dominated agency. It is essential that they hear from you. Only they can give authority for health back to the EPA, which has tried in the past to protect the public. Congress defunded EPA and removed its authority to protect the public from wireless radiation to stop it.

Contact your Congressional Delegation (2 Senators and 1 Representative) Look them up and find their phone and FAX numbers at: https://www.senate.gov/general/contact_information/senators_cfm.cfm and https://www.house.gov/representatives/.

Call the White House - 202/456-1111. Ask President Obama to halt the rollout of 5G in light of the safety hazards.  President Obama can also be emailed using the form at https://www.whitehouse.gov/contact/submit-questions-and-comments.