"Career Forums" were staged by PR Society chapters in Atlanta and New York this spring with the aim of attracting the "best and the brightest" of soon-to-be-grads.

But where are the celebrities of PR who can serve as role models for the students and make PR an attractive career? There are very few such models when there used to be scores of them.

Celebrities are attracting a lot of attention in a lot of areas these days, as pointed out by the excellent book, Celebrity Leverage by Jordan McAuley.

Students who covered the career forums for us said they were disappointed.

The Feb. 22 Georgia chapter forum drew more than 200 but our reporters said practical advice and actual job and internship openings were in short supply.

Every speaker stressed the importance of "ethics" but our reporters asked exactly what was ethical about not having a literature table with industry directories, magazines, newsletters and various books?!

The forum April 2 at New York University drew about 100 students when more than 300 were predicted. Students covering for us said there were about 50 attendees during the morning and this grew during the day.

A principle aim of the New York session was attracting minorities.

Counselor Mike Paul said what PR lacks is a hefty supply of minorities in top roles who can serve as models for minority students.

He says that without such highly visible success stories, PR is not going to lure top minority students who will go into Wall Street, law, and corporate administrative and marketing posts.

Except for Paul and Fraser Seitel, both of whom have logged hundreds of stints on TV and radio shows in the past few years, and Richard Edelman, who accepted the Paladin Award of the Society Foundation last week, there are virtually no "celebs" in PR these days. PR trade groups are dominated by corporate administrators and academics who rarely make an appearance.

PR Once Had More Celebs

Where Are the Tom Cruises, Gwyneth Paltrows and Kardashians of the PR world?

PR in the 1960s, '70s and part of the '80s had quite a few notable personalities who brought "good ink" to the industry.

The "queen" was Denny Griswold, who reigned for more than 40 years until she was clapped away in a nursing home in 1995 by her relatives.

Griswold, editor of PR News, was "a piece of work," as Ford CEO Lee Iacocca said at one of the PRN banquets she staged each spring for corporate PR people who had achieved VP status.

More than 1,000 in black tie attended an anniversary party in the Waldorf-Astoria for PRN. There were three decks of corporate executives on the stage and an orchestra serenading the gathering.

She was a powerful personality and extremely sociable. Dinner parties for PR execs were regularly held at her townhouse on E. 80th st. Special friends were invited for a weekend at her country home in Weston, Conn.

Griswold, the former Denora Prager, was held incommunicado at the Wilton Meadows nursing home for the last 5.5 years of her life. Her death at 92 on Feb. 7, 2001, was discovered by this reporter who tried to reach her on the phone. Her many friends should have gone to the police.

Dozens of PR firm and corporate

PR executives were highly visible in the PR community, either hosting events or building personal relationships with reporters via lunches and home & home visits.

The "fun" part of PR, for many of its practitioners, was being with and entertaining reporters. Don Baer, CEO of Burson-Marsteller, told the 60th anniversary party of the firm April 23 that working with reporters "is part of the joy of what we do."

Engaging personalities included Herb Rowland of The Rowland Co.; Paul Alvarez and Dave Drobis of Ketchum; Mitch Kozikowski of Creamer Dickson Basford (a finalist with Ray Gaulke for COO of the PR Society); David Finn of Ruder Finn; Ed Stanton of Manning, Selvage & Lee; Phil Fried of Monsanto; Ned Gerrity of ITT who annually hosted more than 100 writers and their families at the ITT grounds in Nutley, N.J., and who staged the Brussels Boy's Club dinner each spring at the St. Regis; Walter Carty of Hill & Knowlton, who was president of the New York chapter of the PR Society; Bob Wood of Carl Byoir & Assocs., who often hosted reporters at lunch and his golf club, and many others.

Many people in PR were very visible. H&K in 1976 published a 228-page collection of speeches by its own staffers. Staffers Roy Battersby, Jim Catalano and John Berard regularly visited reporters at their desks. Nearly 300 attended monthly lunches of the New York chapter in the Waldorf-Astoria. The national president addressed the final lunch each June.

A freeze set in at Society h.q. in 1980 when Patrick Jackson of Epping, N.H., correctly stating that New York's dominance of the Society was at an end, was elected president. His approach to reporters was "duck 'em, screw 'em" and "go direct."
Nearly 10 PR careerists on staff were quickly off-loaded.

Smith was not only relieved of her COO post but was exiled to an office on upper Madison ave. for the Society's non-profit arm and told not to return. Association professional Betsy Kovacs became COO and stayed until 1992. 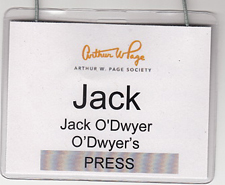 The Society in 2007, after a search for a candidate who would be a "charismatic leader," someone with a "vision" for PR, and an "accomplished public speaker," instead picked William Murray of the Motion Picture Assn. who has yet to address a single group in New York that we know of.

His visit to the Minnesota chapter in 2012 was only the second such chapter visit since January 2007.

Murray Should Be Visible

Murray, who carries the title of president and who had a pay package of $382,013 in 2011, should be one of the most visible people in PR.

He was at the Foundation dinner April 24 but we did not see him circulating during the cocktail hour. Foundation president Lou Capozzi, at our request, led us to his table and we said "Hello."

Not present as far as we could see was VP-PR Arthur Yann, whose pay package of $186,485 should propel him to make a raft of broadcast and print media appearances.

A flaw at the Foundation dinner was the lack of name badges which are common at such events, including the Arthur W. Page Society spring dinner April 4 and the Institute for PR dinner Nov. 8, 2012.


The Foundation website's coverage of the event omitted the picture of Richard Edelman with this reporter and associate publisher John O'Dwyer. Edelman took part in that picture to show that he is on good terms with reporters. It should have been on the Foundation website.

Having good relationships with media is no doubt a key reason why Edelman's 2012 revenues of $655 million were more than five times the revenues of the next largest independent, APCO Worldwide.