Parents of children in Maryland are waging a battle to have wi-fi equipment removed from classrooms. School authorities thus far are claiming the classrooms meet “FCC regulations.”

“School Wi-Fi is Wi-Fi on steroids,” says Safe Tech for Schools Maryland. Its site carries a YouTube segment that appeared on WSUA-9.

The organization says school authorities are ignoring 13 letters from medical doctors, researchers and others interested in combating excessive electromagnetic radiation, particularly radiation that affects children whether in classrooms or outside of classrooms. 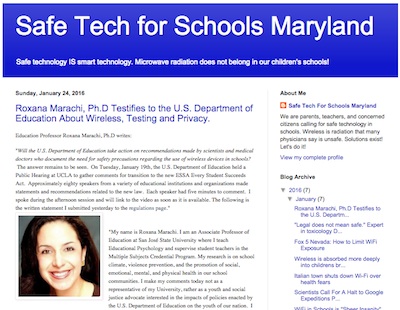 Links to some of the letters are as follows:

Letter from Cindy Sage of the BioInitiative Institute and Prof. Trevor Marshall of Brussels.

Citizens will gather tonight (Jan. 26) at 7 p.m. in the library at Ashland, Mass., to view a film called “Mobilize: A Film About Cellphone Radiation” hosted by Friends of the Library. It is the fifth in a series of discussions on the dangers of electromagnetic radiation.

Other sessions have featured British physician Dr. Erica Mallerly-Blythe speaking on “Electromagnetic Radiation Health for Children” and a forum of the Framingham Board of Health and Ashland School Committee “questioning the safety of our children’s exposure to wireless radiation: an important discussion for parents.”

A program Feb.11 will urge residents to “be aware of the adverse effects (of radiation) so that we can have the choice of taking precautions against the exposures.”

Board and staff members of the Westhampton, N.Y., library, asked whether the library will conduct a program on the health hazards of Wi-Fi and other radiation, said that the topic will be taken up at its Feb. 10 meeting. Danielle Waskiewicz is director of the library.

Fox 5 did a segment on concerns about cellphones Jan. 19 hosted by Ernie Anastos.

Google and Qualcomm are paying the $200 million cost of the project which will be half-finished by 2020. The links will provide Wi-Fi that is “a hundred times faster than the usual public Wi-Fi, “ says the New Yorker.

Citizens concerned with excessive Wi-Fi radiation have questioned the safety of such kiosks.

The San Francisco Giants baseball team and AT&T are installing Wi-Fi stations throughout its stadium which will be the most Wi-Fi friendly in sports.

Global Union Against Radiation Deployment from Space (GUARD) is battling plans by Google, Facebook and SpaceX to use hundreds of high altitude balloons to provide Wi-Fi to areas of earth with no access to such technology. It is called “Project Loon.”