PR's ability to bring people together is the crucial part of the digital age equation, according to Walter Isaacson, CEO of the Aspen Institute, former CNN chief and Time magazine editor.

He was a keynoter at today's opening session of the PRSA International Conference in Washington. 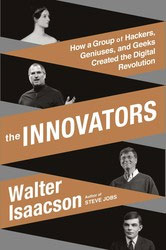 Isaacson, who just published "The Innovators: How a Group of Hackers, Geniuses, and Geeks Created the Digital Revolution," said humans are social animals that achieve their best work when they collaborate.

In his view, the idea that a single "light bulb moment" spawns new breakthroughs is wrong.

Likewise, vision without execution is hallucinatory.

Isaacson gave Shockley Semiconductor as an example of a company founded by a genius that was quickly surprised by a competitor which stressed teamwork.

But Shockley Semiconductor achieved only a fraction of the commercial success of Intel, which was set up by ex-Shockley engineers Gordon Moore and Robert Noyce.

They recruited Hungarian-born Andy Grove, a hard-driving executive who fled the Nazis and Communists, to make their vision work.

While Isaacson said today's media are absolutely being disrupted, such upheaval is nothing new.

Disruption dates back to the dawn of the Industrial Age when machines began to replace peoplework. PR people shouldn't fear technological change because a potential outcome of disruption is creating better links to bind humanity, he said.

In accepting the honor, Gallagher admitted to feeling a tad awkward, saying: "I'm not that old. My career is far from over."

Texas-born Gallagher spent the past 14 years overseas, following the advice of his 98-year-old grandmother in Oklahoma, who told him "to be generous and pleasant. People will help you when they like you."

The one-year breast cancer survivor spoke about how her Facebook and Twitter exploded each time she provided updates on her eight rounds of chemotherapy.

Robach was overwhelmed by the intensity of emotional support that she got from her social media followers.

She cited a YouTube posting to promote the debut album of the Austin all-female rock "The Mrs." as one powerful way the medium connects people.

Released two months ago, the video has been viewed by 3.8M people.

She showed the three-minute "I'm Enough" mirror clip. The piece had many in the audience crying.

Robach, who has viewed the video a number of times, says she cries each time she watches it.